With a rich and silky smooth custard-like character, this easy German Buttercream recipe (Crème Mousseline) is absolutely divine, my favorite buttercream frosting. It's composed of a simple pastry cream base that is enriched with butter, which is what makes it stand apart from more traditional sugar-heavy buttercreams. You can use Crème Mousseline on a variety of desserts from layer cakes and cupcakes to French macarons.

💡 What are the 5 types of buttercream?

American Buttercream is the easiest to make and most commonly used type of frosting. It's very very sweet and is made by simply whipping butter and powdered sugar together, typically with a small amount of milk. American buttercream is fairly stable which makes it good for decorating. However, it is super sweet, less delicate, and less complex when it comes to the flavor profile.

Swiss Meringue Buttercream is a little less sweet and has more steps to make than American buttercream. As the name suggests Swiss Meringue buttercream has a Swiss meringue base, which makes it lighter and creamier. It's typically composed of egg whites and sugar cooked together over a double boiler and then whipped up with butter and a dash of salt and vanilla extract. It is super stable but you need to pay attention to the swiss meringue stage.

This one is light and smooth, a less-known buttercream, made with egg yolks (instead of egg white like the previous buttercream version), butter, and sugar syrup, similar to Italian meringue buttercream. French buttercream is a little more difficult to make and is naturally yellowish in color due to the egg yolk.

Also called crème mousseline, it's basically the most delicious buttercream in my view, a different league from the rest. Cream mousseline is made of pastry cream and butter. German buttercream frosting has a lovely creamy texture, a superior custard-like taste profile, can be easily flavored, and most importantly not as sweet as the previous buttercream types.

It is used for French Classics such as Paris-Brest, Fraisier cake, but can be also flavored to make the most amazing Ferrero Rocher Cake or Lotus Biscoff Cake.

Making mousseline cream is also not hard at all but does require a few steps.

💡 What is German buttercream made of?

To begin, what is German buttercream? Also called Bavarian buttercream as well as mousseline cream, it's essentially a custard-based buttercream. You start with a pastry cream that is made with egg yolk, milk, and thickening ingredients such as cornstarch and flour. For more details please check my pastry cream recipe. Then, once the mixture comes to room temperature, it is whipped up with soft butter.

💡 Is Ermine frosting the same as German buttercream?

While these two frostings are similar, they are not the same. Ermine frosting is also called flour buttercream and has a pudding base. Basically, flour, milk, and sugar are cooked together to make ermine so no egg yolk is involved as in the German buttercream. German buttercream has a custard base that is similar to ermine but also egg yolk plays a key part.

Like most European-style frostings, custard buttercream is most definitely less sweet as well as both richer and more complex in flavor. It relies solely on its pastry cream base for all of its sweetness. So it's a fantastic option if you've ever wondered how do I make buttercream frosting for cakes less sweet!

🌟 Why this is the best German buttercream frosting recipe

👩‍🍳 How to make German buttercream

1. How to make pastry cream for the German buttercream

💡 Top Tip: As it thickens in the saucepan the cream may get lumpy at first, but just keep whisking and it will become smooth and glossy.

2. How to whip up the German buttercream

💡 Top Tip: The cream will naturally set in the fridge due to its butter content (like any other buttercream) so if you want to pipe it, I recommend refrigerating the cream for no more than 1-2 hours.

✨ What is German Buttercream used for

This frosting can be used in combination with numerous other dessert recipes and flavored too. The possibilities are endless!

To get started, how to flavor German buttercream? It's actually pretty easy and done by simply whipping in your choice of flavorings into the butter and then adding the pastry cream to complete the crème mousseline recipe. Some of my favorite ways to flavor the buttercream are with ground cinnamon, cocoa powder, Biscoff butter, Nutella, peanut butter, and hazelnut praline.

And of course, you can use the frosting on cakes, cupcakes, cookies, or as filling for classic french pastry like choux! Just check out all these delicious recipes to use your wonderful and easy custard buttercream!

Yes, German buttercream is a stable frosting however needs to be refrigerated. During the making, soft butter is incorporated into the pastry cream so naturally, the cream will be a bit soft straight when it is whipped up but it will set in the fridge.

Can you pipe German buttercream?

Yes, German has lovely pipeable consistency. I recommend refrigerating the cream for no more than 1-2 hours as it will set in the fridge after making it more difficult to pipe.

How to fix German buttercream?

If your German buttercream curdles or separates while making it, it is most probably due to pastry cream and butter not being at the same temperature. Use a hair drier and heat the side of the bowl while continuing to whip the mixture for another 12- minutes. This trick works in most cases.

Does German buttercream need to be refrigerated?

Yes, it must be stored in the fridge and will keep for about 3-4 days. It can not be left out at room temperature meaning German buttercream is not appropriate if you want to store your cake in the heat for hours.

Can you freeze German buttercream?

I don't recommend freezing this type of frosting as pastry cream does not freeze well at all.

Have you tried this recipe?

Please leave a 5-star ⭐️⭐️⭐️⭐️⭐️ rating on the recipe card and consider leaving a comment as well! I would love to hear about how your dessert turned out and your feedback also helps other Readers! 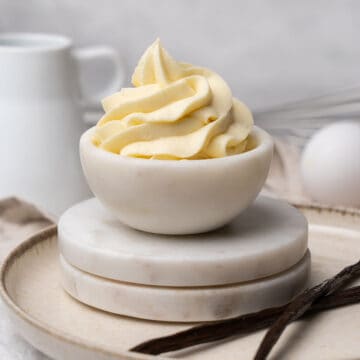 Start with the pastry cream

The BEST Valentine´s desserts in one place whether it be a super easy red velvet brownie, chocolate bonbon, a restaurant-quality dessert, or festive cakes.