Can´t choose between brownies vs. blondies? You don´t have to! This Brownie Blondies recipe might become your favorite, the perfect combination of chewy chocolate brownies and fudge blondies! It is rich, yet very well balanced in sweetness! Absolutely out of this world, a must-try recipe for brownie and blondie lovers!

My Blondie Brownies bars recipe has the most amazing texture AND taste at the same time with the benefit of both brownies and white chocolate blondies. Imagine a brownie blondie swirl that is effectively a chewy blondie enhanced with chocolate chips and layered with the most amazing chocolate brownie.

Why this is the best Brownie Blondies recipe

5 reasons you should make this recipe

Difference between blondies vs brownies

Well, the main difference is the chocolate obviously! That is also the reason why brownie is brown, while blondie as the name indicates, is blonde!

Technically, blondies and brownies are both classified as cookie bars. They both contain eggs, flour, sugar, and butter. Both brownies and blondies have a fudge texture and are typically cut into bar shapes. They are both super delicious if you ask me!

The difference between brownies and blondies is mainly the color and one ingredient, which is chocolate. Chocolate is used in a melted format in the brownie recipes, while white chocolate chips is added to the blondie recipe without melting it. While brownies have a super deep and delicious chocolate flavor, blondies are famous for their molasses, butterscotch flavor. One might even call blondies butterscotch brownies!

This Brownie Blondies recipe is literally the best of both!

In this Brownie Blondies recipe, the brownie and blondie part ingredients are almost identical with the exception of cocoa powder and the way how chocolate is used.

Exact Ingredient quantities can be found in the RECIPE CARD, at the bottom of this page.

1. How to melt chocolate without burning it

Have you ever wasted chocolate due to incorrectly melting it and burning it? Never again!

For the brownie part, you will need to melt the chocolate. The double boiler is a common method for melting chocolate without burning it. You might have to play around with combinations of pans and bowls to find the perfect fit, but it works perfectly fine.

While melting chocolate, make sure the water does not touch the bottom of the bowl. Remove chocolate from the heat as soon as it is melted, it is possible to overheat the chocolate, and in that case, it will break. Never ever try to melt chocolate directly on the stove as you will burn it in seconds.

Another option to melt the chocolate is the microwave technique - strictly stirring every 30 seconds. If choosing the microwave option, I suggest placing chocolate into a plastic container. It is much easier to burn it in a glass container.

Either way, aim to use good quality chocolate with high cocoa content eg. Callebaut Dark Chocolate (callets) both in terms of texture also taste point of view. Low-quality chocolate might already break at the melting stage and becomes greasy.

Making this recipe is easy but there are a couple of key steps you have to get right to achieve the right texture.

For the brownie part:

For the blondie part:

Baking the Brownie Blondies is a super delicate matter, the most important part of this recipe!

First of all, never bake any dessert without properly pre-heating your oven first, so start with that. The brownie blondies will be baked at 180 C / 356 F. Preheat the oven +20C / 68F as the oven temp drops when you open the door. Always use Digital oven thermometer to avoid over- baked crumbly or under-baked desserts.

Each oven is different so you might need to adjust the time slightly but in my oven, I bake the brownie blondies for 35 minutes. It is ready when the edge looks sort of baked, and the middle slightly gooey but not raw. Do not over-bake your blondie brownies! Usually, recipes state "bake until a toothpick inserted comes out clean", however, in this case, the toothpick should be gooey. If it is clean, it means you sadly over-baked your dessert.

4. How to get crinkle top on these blondi brownie bars

Everyone is crazy about crackly brownie surfaces, let me tell you that I was not very good with that for a long time, due to I always tried to bake brownies with less sugar than I should. Please do not change this recipe, it is perfect with the right amount of sugar to give you that lovely crackly surface. Reducing sugar will have an impact on the overall texture of the brownie as well as the crackly top, of course, you are free to do that for health reasons, but expect that the texture will change.

If, for some reason, the crackly surface would not develop on your Brownie blondies, bang the tray on the kitchen counter a few times (5-10 minutes before the baking time ends), that will encourage cracks forming on top! Easy peasy!

5. How to get gooey center

For gooey brownies, first of all, you need a brownie recipe that has the right ratio of ingredients eg. high enough fat content (butter) vs flour, good news is that this easy recipe perfectly delivers on that!

Thirdly, do not over-bake the blondie brownies! In fact, it is like making cookies, you have to take them out of the oven when they do not look properly baked yet... It is better to under bake your brownies than to over-bake them.

What baking pan is the best to make Brownie blondies? Honestly almost any pan can be used however my preference is a 7 inch /18 cm square brownie pan that makes 9 wonderful large brownie slices! What is a more important topic is how you prepare your pan before baking!

Remember, the brownie will be gooey, fudge so you want to make sure that you can remove it from the pan in one piece without breaking it. How to prepare the 7-inch pan before baking? With the help of a pastry brush (or your fingers), brush the inside of the cake pan with a very tiny bit of oil or melted butter, then use parchment paper on the bottom and side as well.

The oil is only needed for the parchment to stick to the pan. What I love about this pan preparation is that even though this Brownie Blondies recipe is super fudge, with the help of the parchment paper it is incredibly easy to remove the baked dessert from the pan, it won´t stick to it whatsoever.

Can I make this recipe in a smaller / bigger pan

Yes, you can, however, you will need to adjust the ingredient quantities and baking time accordingly.

Can I make this Brownie Blondies recipe eggless, gluten-free etc.

Most probably yes, you can, however, you can´t just leave out / change an ingredient without reformulating the entire recipe. When one ingredient changes, some other ingredients need to be changed too in order to keep the balance in the texture and flavor. Sadly, I am not able to provide substitutes for all sorts of allergies and diets.

Why are my Brownie blondies raw in the middle

There are a couple of reasons why your dessert can turn out to be raw, and fixing it requires different actions.
First of all, make sure that you let the tray cool completely. The Brownie Blondie bars are meant to be way too gooey while they are hot, but they will set as they cool.
If the dessert seems raw even after chilled, you most probably underbaked it. Under baking can happen for two reasons: either because of incorrect oven temperature (lower than stated in the recipe) or simply the blondies would need a bit more time in the oven. Make sure you invest in an inexpensive Digital oven thermometer if you tend to struggle with the baking part.
Another issue that can cause raw texture is measuring the ingredients inappropriately eg. adding less flour to the recipe. Make sure you use a Digital scale during baking, cups are not an accurate way of measuring for consistent results.

Why are my Brownie blondies cakey and not gooey

Similar to the raw texture there are a couple of issues that might have happened.
You most probably over-baked your blondie bars, either because of incorrect oven temperature (higher than stated in the recipe) or simply you baked the Brownie blondies for too long. Make sure you invest in an inexpensive Digital oven thermometer as suggested above.
Another issue that can cause too cakey texture as opposed to gooey texture is measuring the flour incorrectly, eg. adding too much flour, or measuring the fat incorrectly, eg. too little butter. Make sure you use a Digital scale during baking. Over mixing the ingredients can also cause a cakey texture on your brownies. You have to incorporate the dry ingredients with a rubber spatula and don´t use the mixer at this point.

Why is the blondie part not visible

Probably you swirled the batters together too much, and the brownie part entire blended into the blondie layer.

Once the Brownie blondies are baked, make sure you let it cool (as it is further set) before cutting. Any leftover can be stored in an air-tight container either at room temperature or in the fridge for 3-4 days. I suggest you cover the dessert so it does not absorb any smell from the fridge or from the kitchen.

Technically you can freeze these Blondie brownies in an airtight container however the gooey texture might change slightly. I personally never freezer brownies since they stay fresh for a few days or they are gone quickly!

Fudge Pecan brownies  -  This Pecan brownies recipe is thick, fudge & gooey in the middle, crinkly and crispy on top with intense chocolate taste, crunchy pecans, and a pinch of cinnamon… absolutely out of this world!

Raspberry brownies - If you like brownies, you will love this version with raspberries that are perfectly balancing the sweetness of the chocolate brownie. Gooey, dreamy center, crinkly top sprinkled with freezed dried raspberries 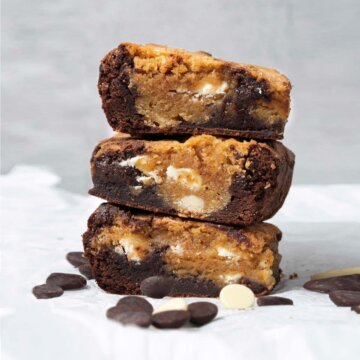 For the brownie part

For the blondie part

Start with the brownie part

Continue with the blondie part