This Homemade Ruby Raspberry Ice cream bar recipe is the best thing that can happen to raspberries this summer. Super creamy and delicious No churn raspberry yogurt ice cream bar coated with Ruby chocolate, that has a wonderful natural pink color! The ultimate girly pink ice cream recipe you must try.

The No churn Raspberry ice cream is made of using a few simple, natural natural ingredients and comes together in 10 minutes without any ice cream machine! This is super a creamy ice creamy recipe that is rich and soft with without being icy or hard! The flavour is not too sweet, fruity and yogurt style at the same time. A must try if you like raspberries and want to make a delicious summer dessert in 10 minutes!

This Homemade Ruby Raspberry Ice cream bar recipe is seriously better than any raspberry ice cream from the supermarkets! Let´s get started!

What does No churn Ice cream mean?

It means no fancy expensive ice cream maker is required to make homemade ice cream, all you need is 10 minutes and an electric mixer or hand whisk. No churn ice creams like this Ruby Raspberry Ice cream bar is usually made of a few simple ingredients (cream, condensed milk plus the flavoring like coffee, fruit puree etc) super quickly and easily. No Churn ice cream is the perfect ice cream recipe even if you are a beginner in the kitchen or perhaps a Pro but don´t want to purchase an ice cream machine.

Is No Churn ice cream good? I will be honest with you, I was sceptical and thought I can never make good, creamy ice cream without ice cream machine. How wrong I was! Since I tried this easy 10 minutes no churn ice cream base recipe, I can´t stop making a new flavour each week! See some of my other flavour recommendations at the end of this blog post)

What is Ruby chocolate

Callebaut Ruby chocolate is what makes Raspberry ice cream coat wonderfully pink without any food colouring! Ruby chocolate is a variety of chocolate introduced in 2017 by Barry Callebaut, a Belgian–Swiss cocoa company. It is marketed as the “fourth” type of chocolate alongside dark, milk, and white chocolate varieties and is notable for its natural pink colour. The chocolate is characterised by a taste that has been described as slightly sweet and sour, similar to a natural berry flavour, however Ruby chocolate does contains berries, berry flavor or colorings. It is incredible, I am totally in love with it and warmly recommend to try! I order it from Amazon, you can check it out in here. If you are unable to purchase Ruby chocolate, the recipe can be made using any other chocolate eg. white chocolate with some add ins eg. freezed dried raspberry using as food coloring

As you can see, it is totally possible, in fact super easy, to make No churn ice cream at home using very few natural ingredients. Let’s have a look at the technique part of making home-made ice cream step by step in the next section.

1. What equipment is needed to make No churn homemade Ice cream bars

By now you already know that this Ruby Raspberry Ice cream recipe does not require an ice cream machine! Hurray! You can totally use a paper cup or plastic container to make ice cream however if you want to make your ice cream into a bar format then you will need a mould and some ice cream sticks.

The product I am using is a rather affordable Ice cream mould from Silikomart that you can purchase from Amazon in here, it contains the sticks too and perfect for making ice creams, I am very pleased with it! It has a nice size, and super easy to release the frozen product.

2. What is the process of making this Ruby Raspberry Ice cream bar

Making this Ruby Raspberry Ice cream could not be simpler, literally 10 minutes or so, the most difficult part is the waiting until it sets in the freezer. The recipe makes 4 ice cream bars, feel free to half or double the recipe, if needed.

Coating these Raspberry Ice cream bars could not be easier! Basically you will need to dip the frozen ice cream bars into melted Ruby chocolate however it is very important that 1. both of these are on the right temp 2. you do it quickly=1 dip to avoid melting them together

To be able to successfully and quickly coat your ice cream bars, make sure that ice cream is properly frozen (min 6h in the freezer). For coating, chose a tall but skinny glass that you will pour the melted Ruby chocolate in just before coating. Truth is, you won´t need all the chocolate stated in the recipe, but you have to melt enough chocolate to be able to dip the ice cream into it. Any leftover chocolate can be poured onto a parchment paper then it will set in a few hours and can be reused. Since chocolate won´t be tempered this time (no need), the leftover chocolate won´t set hard and snappy. But, you can always use it for making other recipes or place it into the fridge and eat it!

Tip 2: Only dip the ice cream bar into the chocolate once. A second tip would risk 1. they melt together 2. chocolate set “wrinkled”

Tip 3: If you have a warm kitchen and coating does not seem to set, open the freezer door and hold the ice cream “into the freezer” with the help of the stick. The chocolate coat will set in this cold temp fairly quickly

4. How to store these Homemade Ruby Raspberry cream bars

Since this is a natural ice cream using only 4 real ingredients – unlike store bought ice cream – I find they might be a bit hard straight out of the freezer and they need about 3 minutes on room temp before the inside starts to get soft and they get the texture you see on these pictures. Obviously it depends on where you live, in a warmer climate they might start to melt already after one minute. Please also note that the part that is not coated melts quicker.

Want to try some other homemade ice cream recipes too? 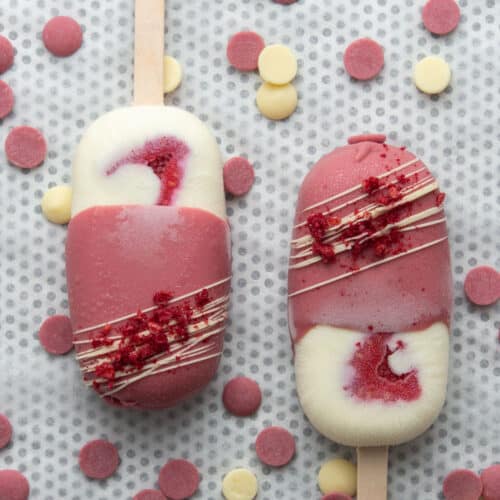 I am Katalin, self-taught baker, recipe developer, food photographer and digital marketer. ​I am also a traveler and full time foodie. I love exploring new places, new flavours and collecting experiences around the world - just like on this picture enjoying the world's best pastéis de nata in Lisbon. Come and join me on this journey!

This website uses cookies to improve your experience. We'll assume you're ok with this, but you can opt-out if you wish. Accept Read More