Substitutes for sweetened condensed milk can be a lifesaver when you run out of it! Healthy, vegan, homemade, or sugar-free, I've got you covered!

Whether it be due to low stocks at your corner store or a forgotten grocery run, there are many reasons for keeping a couple of alternatives up your sleeve.  In my list of substitutes for sweetened condensed milk below, you will find both simple options and options that can be customized to your individual tastes and dietary restrictions.

What is sweetened condensed milk

Thick, creamy, and sticky, it's easy to see why sweet condensed milk is a popular ingredient in many recipes eg. for ice cream recipes. But what is this sugary concoction you ask? Simply put, sweetened condensed milk is just plain old cow's milk with water removed. Once up to 60% of water content is eliminated from whole milk, it forms reduced milk. Sugar is then added and the final mixture is canned. This way, it can even be stored outside a refrigerator.

In fact, the concept of condensed milk was conceived in the mid-1800s as a longer-lasting milk substitute.  Charles Page, one of the forefathers of Nestle established the first condensed milk factory in Switzerland to provide safe, healthy, and portable milk to the military troops. The extended shelf life led to the sales boom of condensed milk and using sweetened condensed nowadays is accessable in almost all countries.

To understand how to substitute sweetened condensed milk, besides its texture and taste, it is important to take into consideration its nutritional facts. As per Nestle’s La Lechera, a serving (39g) of sweetened condensed milk contains 22g of carbohydrates, 2g of protein, 3.5g of fat, and 100 mg of calcium. So, 56% of the product is sugar (some natural sugar in the milk, and most of it is added sugar), while the fat content is only slightly higher than whole milk (5% vs 3%).

What to look for in a substitute? A good substitute should closely resemble sweetened condensed milk in its sweetness, texture, and color. Low calories, low sugar, and dairy-free substitutes that accommodate different dietary needs are a bonus. However, whenever you chose to modify the initial nutritional elements by eg. adding less sugar, expect the taste and even the texture to become slightly different.

Use it in any recipe in exactly the same amount as the condensed milk (1:1). Creamy ice creams this summer, warm pumpkin pies for Halloween, or gooey treacle fudge in winter, this condensed milk replacement is an all-around winner.

When substituting for sweetened condensed milk using evaporated milk, you can reduce the sugar to literally zero, if don´t mind the nonsweet taste, however, expect a slightly thinner texture in that case.

A staple in the bakery cabinet, heavy cream has a rather thick consistency but it is not as thick as condensed milk so you will need to reduce its volume by cooking.

So, in 2:1 ratio take heavy cream and granulated sugar in a saucepan and let it simmer for about half an hour till it thickens and its volume reduced to about half. Once cooled, use this homemade sweetened condensed milk in the same amount as regular condensed milk (1:1).

Powdered milk is a great addition to your shopping list if you're traveling and need substitutes for sweetened condensed milk. Rehydrate powdered milk with an equal amount of hot water till it reaches the desired consistency. The final step is to add a small amount of butter to increase the fat content and some sugar to sweeten the mix. Add as much or as little as you wish to achieve for the final usage of the condensed milk.

It can then be used as a substitute for sweetened condensed milk in cheesecake, cookies, custard, and pie at a basic 1:1 substitution for condensed milk while paying attention to the sugar level (it will be less than store-bought condensed milk).

Lactose intolerance should never be the reason to bake a cake and not eat it. Canned coconut milk is a vegan substitute for sweetened condensed milk for those avoiding cow milk. Of course, it is also dairy-free. You can safely use it to make a delicious vegan pie, cheesecake, or crunchy cookies. But fair warning, the end result might have a tinge of a coconutty flavor to it.

Coconut milk that comes in cartons is watered down and way less creamy. So, always go for the full-fat option of coconut milk; you'll find it has the closest consistency to condensed milk. Since full fat coconut milk is effectively unsweetened, again you can choose to add sugar based on your preference. Let it simmer over low heat for half an hour till it thickens to the required consistency. Keep stirring the mix to prevent it from bubbling over.

And if you're cutting down on sugar, just switch out the white sugar with a substitute sweetener like coconut sugar or maple sugar. Or, leave out the sugar altogether for a sugar-free sweetened condensed milk option.

The natural sweetness of coconuts makes it a fantastic sugar free substitute for condensed milk. However, if you do wish to sweeten the pot, add some sugar into the mixture and simmer it until the sugar fully dissolves. Replace it for regular condensed milk at a 1:1 exchange.

This exotic-sounding substitute for sweetened condensed milk is a staple in another infamous tropical treat: piña coladas! And while they do sound very similar, it is not the same as coconut cream. Sweeter and pre-mixed with sugar, cream coconut is less dense than coconut cream.

This can be your number one option for a healthy substitute for sweetened condensed milk. Vegan and sugar-free, this substitute for sweetened condensed milk is precisely what you need for some free-from baking. Plus, since it contains no coconut, it is safe for those with coconut allergies. Blend together 1 portion of cashews (pre-soaked overnight), half a portion of maple syrup, ⅛ teaspoon of sea salt, half a portion of nut milk (preferably almond milk), and a teaspoon of vanilla extract. Once smooth, simmer over medium heat for a few minutes while constantly stirring.

Change the thickness of the mixture if needed by adding more milk.  While the taste might be more earthy because it is naturally sweetened, the biggest advantage of this substitute is the lower calorie and sugar content.

So, if you are looking for a sweetened condensed milk alternative that is the closest to store-bought in terms of texture, taste, and sweetness, go with this super easy recipe that is based on nutritional facts!

How to make condensed milk at home?

To keep the math easy, I will reduce the milk to 50% = half, as per below. So, how to make your own sweetened condensed milk? Follow these easy steps:

💡Top Tip: Some recipes state not to stir the mixture, well, I disagree, I like to stir the mixture at both cooking stages to avoid milk burning. Having said that, keep the heat low enough so it is less chance for milk burning plus it won´t caramelize too much. But, the milk should be simmering in order to reduce its volume.

What is sweetened condensed milk used for?

From Vietnamese coffee to rice pudding, condensed milk is used across the globe in cooking and baking in many dessert recipes. Since it adds moisture and flavor, it often replaces liquid and sweet components in baking recipes. It is also commonly added to cakes, brownies, cookies, pies, cheesecakes, fudges, candy, truffles, and more thanks to its thick consistency and sweetness. It can even be used to make a butterscoth sauce and no-churn ice cream!

What is a dairy-free substitute for sweetened condensed milk?

There are plenty of non-dairy replacements for condensed milk. Made from nuts (cashew, macadamia, almond), soy milk, oat milk, or coconuts, these vegan alternatives are safe and tasty condensed milk substitutes.

Calcium in condensed milk can contribute to up to 8% of the recommended levels per day in just two tablespoons, whereas an equal amount of whole milk contributes to just 3%. The American Heart Association recommends limiting sugar intake to 36g for men and 25g for women per day. A single serving of Nestle's condensed milk contains 22g of sugar, so those with a sweet tooth need to be a little mindful when indulging in this tasty treat.  When it comes to calories, the net calorie content in a single serving of Nestle's condensed milk is 130 calories. This contributes to a significant portion of the recommended 2000 calories per day (Dietary Guidelines for Americans). A carefully monitored use of sweetened condensed milk is recommended for those on special diets.

Can I use cream instead of condensed milk?

It depends on the recipe, but most probably not. Although both are dairy products, sweetened condensed milk has very different properties compared to cream in terms of sweetness, texture, fat content, etc.

Can I use honey instead of condensed milk?

Most probably not. While both of them are sweet and thick, honey is about twice as sweet and has an extra flavor profile compared to condensed milk. Also, the nutritional properties - that are important in baking - are very different.

What can I substitute for the sugar?

Sweetness depends on the kind of sweetener. But if you want sugar-free sweetened condensed milk, use natural sweeteners like honey.

How many cups are in one can of La Lechera® Sweetened Condensed Milk?

Homemade sweetened condensed milk that has 56% of sugar can be stored refrigerated for 1-2 weeks if kept in an airtight container.

If you want to make the condensed milk ahead of time and freeze it, put it in a vacuum-sealed bag. It'll remain for a good couple of months

Have you tried this recipe?

Please leave a 5-star ⭐️⭐️⭐️⭐️⭐️ rating on the recipe card and consider leaving a comment as well! I would love to hear about how your dessert turned out and your feedback also helps other Readers! 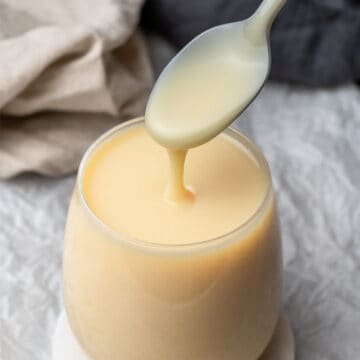 Substitutes for sweetened condensed milk can be a lifesaver when you run out of it! This homemade condensed milk recipe is the best alternative to achieve the same texture, sweetness and color as the original, store-bought versions
5 from 3 votes
Print Pin Rate
Course: Dessert
Cuisine: American
Cook Time: 1 hour
Chilling time: 6 hours
Total Time: 7 hours
Servings: 2
Calories: 750kcal
Author: Kata